It is May 25, 2006. You are sitting in a capacity crowd at Kaufman Center’s intimate Merkin Concert Hall in New York City, listening to Rachel’s perform their last show as an ensemble – though nobody knows that just yet. WNYC 90.3 FM, an NPR affiliate, is broadcasting and Greg King’s scene-setting film is being projected on a giant screen stage-center, its Structuralist pseudo-narratives providing a foundation for the magic unfolding below it.

There is an eerie double awareness – the band both performing for an audience and being taped for a later radio broadcast – as Christian Frederickson, a founding member of the group, steps to center stage.

He says nothing, merely raising his bow. And then the weeping begins as he starts to saw away on his viola, the intimacy of the night captured in each sweet, lulling note. 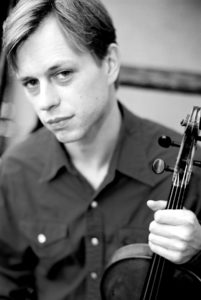 “The thing that’s outstanding about Christian is that he’s so keyed into his tone and sound.”

That’s Ryan Rumery, the composer/musician who created The Painted Bird/Amidst, a production-accompanying CD carefully self-released earlier this year, with Frederickson and the late Jason Noble.

“I feel so many musicians now lose perspective on that. But, the beautiful simplicity that Max Richter has? Christian’s work has that, too,” Rumery told me recently, when we talked about the record. “It’s about the tone of it.”

Christian Frederickson started playing viola in the fourth grade while going to public school in Port Townsend, Wash. – 2014 population 9,255, some 55 miles northwest of Seattle, right near the Canadian border.

“I chose the viola and orchestra almost at random,” he remembered. “And I found I had an aptitude for it.”

The viola took him to The Peabody Institute of The Johns Hopkins University, the United States’ oldest conservatory, where, in 1989, riding a bus decked out like a streetcar, he met Jason Noble and everything changed.
Frederickson had interpreted masterworks and canonical performances extensively, even exhaustively, but soon, with Noble’s urging, he would craft his own.

“Jason later came to see a recital I played and we were hanging out after the recital and he mentioned he had this idea for a song that would sound good with strings on it,” Frederickson said.

The song became “Saccharine,” off Rachel’s 1995 debut, Handwriting. Their initial collaboration was recorded by Tony French at Hat Factory and later mixed by Noble and Jeff Mueller, who had played together in the avant-rap group King G and the J Crew. A year later, Frederickson came to Louisville – his first visit to the musically inclined Kentucky city – to continue working with Noble on what became their first demo, Rachel’s Halo.

“We started writing it out, kind of transcribing it and we just arranged it for string quartet,” said Frederickson, characteristically modest. “At that time, Jason had these ideas and I was helping him realize them for strings and providing support.”

Frederickson trained at Juilliard, went to Switzerland and spent six months in Europe, later meeting pianist Rachel Grimes – with whom he and Noble would form the nucleus of Rachel’s. By 1994, their recordings fell into the hands of Touch and Go Records label-head Corey Rusk, who knew Noble through post-rock giants Rodan, another Noble/Mueller collaboration of note.

“It started with the initial run of Handwriting, which sold out to distributors well before the release date,” Frederickson told me. “We didn’t expect it. We thought we were going to have a lot of gray paper in our basements for the rest of our lives. It was a welcomed surprise, for sure.”

Handwriting went on to sell 30,000 copies – big numbers for an indie band, in a pre-download era nonetheless — before Rachel’s even announced its sophomore release, according to Billboard magazine. In the years that followed, the band expanded its discography, toured extensively, and became nationally and internationally known for its intimate brand of avant-classical chamber music.

Systems/Layers, out in 2003, was their final full-length and their largest statement of purpose.

“In the thirteen years that have passed since that record came out, the little nook of a genre which Rachel’s helped birth—classical sounds with indie sensibilities, film-music moodiness and digital experimentation—has grown,” Benjamin Scheim wrote for Pitchfork when Rusk reissued Systems/Layers last year. “Promoted by labels like 130701 and Erased Tapes and typified by the commercially successful and recognized soundtrack work of Jóhann Jóhannsson, Max Richter, and Ólafur Arnalds, as well as up-and-coming artists like Resina or Emilie Levienaise-Farrouch, post-classical is now a small but thriving world. And Systems/Layers’ status as a godfather record to the nascent genre is undeniable.”

Also undeniable is Frederickson’s importance to Rachel’s. While Noble lent them their indie-rock sensibility and unbridled experimentation, and Grimes offered a kind of compositional Romanticism, Frederickson was the emotional center, the sound of the viola always tugging at heartstrings and softly caressing your ears and brain tissue.

“There was something about the music of Rachel’s that created space, an environment for thought and emotion, inspiration and beauty that just spoke to EVERYONE in the room. It still does that even though Rachel’s is not together anymore. Their music is STILL doing the same thing: moving people deeply,” said Barney Hanlon of SITI Company, which created the dance/theatre piece Systems/Layers scores. “There is something about their music that is profoundly human. And I love that it’s unclassifiable. Is it classical? Contemporary? Rock? ‘Yes’ is the answer to all of those questions. And while the original band Rachel’s is not together officially, they are each still making amazing music and moving people to a degree that is astonishing.”

Frederickson never stopped moving people, though, due to his tendency to shy away from self-promotion, it’s difficult to track his CV.

He designed the sound and performed live for SITI’s productions of Antigone and Trojan Women, and he is currently designing the sound and writing the music for their newest production, Hanjo, which is a modern Noh play by the Japanese author Yukio Mishima. He designed the sound for Charles Mee’s Glory of the World, which had its New York City premiere at the Brooklyn Academy of Music. He composed and performed music for a May dance production of William Shakespeare’s The Tempest, and is writing new music and designing sound for a production of Tony Kushner’s Angels in America, which will be staged at Actors Theatre of Louisville in August and September.

Then, a trip to Bandcamp reveals more — records The Starving Season and Teratogeny, and the soundtrack to the film Death Metal Angola.

“I do work across a lot of different worlds,” Frederickson told me, “From a strictly classical music world growing up and in college, and also music, a completely different musical world with Rachel’s that was creative, where we were playing rock dives to concert halls, and then several years working more exclusively in theatre and dance.”

“I’ve been really fortunate to work with a lot of people who really inspire me and we are able to collaborate,” he added. “It helps provide me a palette of emotions to express myself.”

Then there’s The Painted Bird, a dance trilogy production loosely inspired by Jerry Kosinski’s book of the same name. The piece has led to live productions and CD recordings, and marks the final collaboration between Frederickson and Noble, who died after a battle with cancer in 2012. 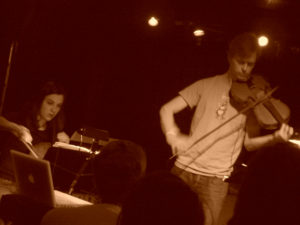 “When I started to think about the new trilogy production … I envision live music that would meet both poeticism and rawness/brutality of the source material,” said Pavel Zustiak, the choreographer/director behind The Painted Bird.

The production premiered as individual works – Bastard, Amidst and Strange Cargo – at Stanica, Slovakia and La MaMa in the US (2010), Baryshnikov Arts Center (2012), and Performance Space 122 at the Cathedral of St. John (2013), Pavel said. The work was presented as a five-hour cycle in its entirety at the Wexner Center for the Arts in 2013 and at La MaMa in NYC in 2014. The individual works toured nationally and internationally.

“In my work I treat all elements as equal in its ability to push the ‘narrative’ of the work forward,” Pavel said. “In Bastard, in particular, Christian’s music spread across a wide spectrum of a sonic landscape – from poeticism of his viola, heart-wrenching in several moments of the production, beyond the rawness of his electric guitar and towards discomfort and other-worldliness that needles and leaves in awe. Amidst brought my work to a new territory where nostalgia meets with a rock band sound and sensibility. Christian together with Jason Noble and Ryan Rumery brought rapturous pulse and presence to this work.”

The rapture is apparent early on.

After the sweet drones of “Slide Show” comes “Corridor,” which is metronomic but utterly passionate beyond its paces. There are touches of Noble’s Shipping News (“The Displaced Body”) and pieces that tremble with sincerity and weeping strings (“To Be One of Them”). In short, it’s an astonishing accomplishment one can only imagine set to a live performance.

It also is stunning as a window onto the decades-long collaboration between Frederickson and Noble, who rehearsed and performed the production up to his death. Three different bass players filled in for Noble afterward but Frederickson said one memory singes his brain: a performance in Columbus, Ohio shortly after Jason’s passing.

“I remember being on-stage at the Wexner and just playing along with those tracks that Jason had made and just sobbing on stage,” he told me.

Kristin Furnish, who met Noble in 1991 and married him in 2006, was similarly touched.

“I can’t put into words what life was like with Jason,” Kristin said. “He brightened every day.”

Frederickson also recently was hit hard with another loss when Rachel’s member Edward Grimes died of a heart attack March 25. He was 43. 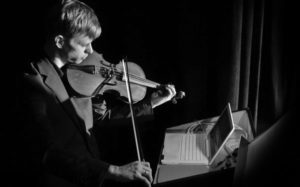 “I can’t believe that two of my bandmates are gone so young, it’s sort of inconceivable,” Christian said recently. “I played a piece from Amidst at the memorial – “Mirage” – which is basically a duet with Edward. The cymbal wash is a recording Jason and I made of Edward years and years ago, which I loved and always found places to use in composition and my sound design work. My music is becoming full of ghosts – so much of who I am as a musician and composer is influenced by my time with Jason and Edward … but it’s just so unfair that those two truly special humans aren’t around to keep moving forward with me.”

Frederickson, as ever, though, is moving forward and forward-moving.

“I feel like I’m emerging from a pretty crazy/busy season and starting to think about new projects and possibilities, which is exciting,” he told me.

“New music, live shows, The Painted Bird part three. It’s all swirling around and starting to get organized.” – Popdose, June 5, 2017